The HydraWand bidet will enhance Your love-life like no other bidet in the world!

I know that sounds outlandish, but who doesn’t want their lover to think of their body  as a “wonderland” to explore, that smells wonderful?  The HydraWand J-Nozzle is designed to produce a fountain similar to the expensive French bidets you sit on, but more precise.  With a Wand in your bath, a  non-invasive “mini-enema” or “mini-douche”, even on the spur of the moment, will take only seconds.  Feeling fresh, sexy and healthy about your hygiene  has never been so easy.

THE REAL SECRET IS …..THAT THE HYDRAWAND IS THE ONLY BIDET  DESIGNED TO  BE USED BEFORE YOU GO.  Less fuss, less time, less mess, less smell, less cleanup, less tissue.

Instead of a lot of washing and wiping afterwards, why not sit down on the toilet, slip the nozzle tip next to the anus. Press the trigger and the warm water will gently flow up inside you coating the stool.  Whether you tend to have hard or soft stools, it will be effortless, with no smell, (because of the film of water surrounding it.)  It’s more effective, and less dangerous, than pushing a hard plastic enema nozzle up inside, (especially for children).    We call it a “non-invasive mini enema.” You’ll be on your way in seconds, feeling cleaner and more refreshed than if you had a bath. It’s basically a healthier, new lifestyle.

LADIES…the Hydrawand is a great option to assembling expensive, awkward disposable douches, with harsh perfumes or chemicals.   You don’t need a long plastic nozzle or hard to squeeze bottle.  The precise Hydrawand trigger, produces a soothing fountain of water, for a pleasant, gentle, natural clean. 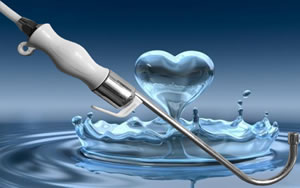 With its precise trigger valve, the Hydrawand can deliver a tiny trickle of water, or stimulating fountain,  for cleansing just the way you like it.  After use, shake it over the bowl a second, for water in the tip to drain out, wipe the tip with a tissue, and the surgical stainless steel nozzle hangs away from the toilet, dry and sterile for the next use.